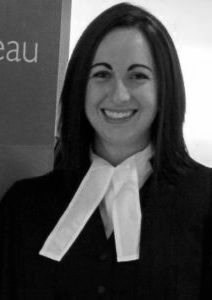 Jessica grew up in Halton Hills and has been an associate at Helsons since her call to the Bar in June 2015.

Jessica initially began as a summer student with the firm in 2009, while attending the University of Western Ontario and working towards an Honours Bachelor of Arts, double majoring in History and Political Science. She continued in that role until the completion of her L.L.B. (Senior Status) from the University of Leicester, in the United Kingdom.

Jessica remained with the firm through her accreditation process and began articling at Helsons LLP in August 2014.